Is there an Arctic ozone hole?

Posted on April 15, 2016 by createarcticscience

By Kristof Bognar
PhD Candidate, U. of Toronto

When scientists speak of the ‘ozone hole’, they usually mean the large region of low stratospheric ozone concentration that develops above Antarctica each Southern Hemisphere spring (August–October). These occur because conditions over Antarctica are favorable for ozone destruction. Strong westerly winds, or jet streams, above the Southern Ocean circle the continent creating a persistent polar vortex that isolates the air above Antarctica (a twin to the Arctic polar vortex). As this isolated air gets colder and colder, Polar Stratospheric Clouds (PSCs) can form.  PSCs are made up of water ice or nitric acid particles, and reactions occur on the surfaces of these particles that release chlorine compounds from reservoir species.

Polar Stratospheric Clouds (PSCs) above Norway. Since these clouds are at very high altitudes (15000-25000 m), they receive and reflect sunlight from below the horizon. Photo: Ivar Marthinusen, via spaceweathergallery.com.

Chlorine then builds up inside the vortex, and when the Sun rises again in the spring, the molecules are destroyed by photolysis. The released Cl atoms then break down ozone via the reaction cycle pictured below. Since the air above the pole is isolated until the vortex breaks up in late spring, large scale ozone destruction continues as long as it’s cold enough (below -78 °C) for PSCs to exist. 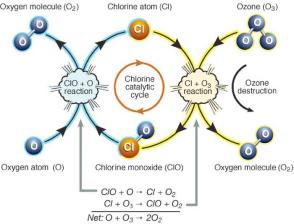 Reactions between chlorine and ozone. A single chlorine atom can destroy thousands of ozone molecules. Source

The atmosphere above the North Pole is much less isolated than the air over Antarctica. The northern polar jet passes over land instead of ocean, and the uneven topography creates a meandering, wavy jet stream pattern and an irregular, variable vortex. The mixing of polar and mid-latitude air prevents the arctic stratosphere from becoming too cold, so PSCs are much less likely to form or persist than in the south. While the underlying chemical processes are the same above both poles, the differences in the evolution of the polar vortex lead to radically different outcomes for stratospheric ozone concentrations.

Daily total ozone concentrations above Antarctica in September 2011 (Southern Hemisphere spring). The blue areas represent ozone depleted air that correlates well with the location of the polar vortex. Note the relatively regular shape and size of these blue areas. Source

Ozone is destroyed above the Arctic every spring, but the net loss is far less than what would be required for an ozone hole.The benchmark total ozone concentration for an ozone hole is 220 Dobson Units (DU). Normal ozone levels are roughly 300 DU globally. Over Antarctica ozone concentrations drop to an average of 100 DU every spring. In the Arctic, however, such dramatic ozone loss is unprecedented, and this is due to the local meteorology.

Daily total ozone concentrations above the Arctic in March 2011 (Northern Hemisphere spring). Once again, the blue areas represent ozone depleted air inside the polar vortex. Note the irregular shapes: the Arctic vortex is more variable than its Antarctic pair. Ozone depletion is also less severe, even though 2011 was a record year in the Arctic. Source.

What’s more, due to transport of warmer, ozone rich air into the vortex in the winter, ozone concentrations in the Arctic are actually the highest in spring. It would require chemical loss comparable to Antarctic levels to bring concentrations even close to an ozone hole. That is, however, exactly what happened in 2010/2011. Due to unusually cold stratospheric conditions, ozone concentrations as low as 220 DU were observed in late March, prompting researchers to acknowledge the existence of the first (and so far only) Arctic ozone hole (Manney et al., 2011).

Monthly average ozone concentrations above both poles. Left: The Arctic in March 2011 (NH spring). Right: Antarctica in September 2011 (SH spring). 2011 saw the most Arctic ozone destruction on record, yet the resulting  ‘ozone hole’ is nowhere near as pronounced as above Antarctica. Source.

This event was also seen by ground based spectrometers at Eureka. These instruments only sample the portion of the vortex directly overhead, but even so they have observed ozone concentrations as low as 237 DU (Adams et al., 2011). 2011 was an exceptional year, since normal springtime ozone concentrations are around 400 DU above the Arctic.

Ozone measurements by two ground-based spectrometers at Eureka. The plots show the number of measurements that returned the given ozone concentrations between Feb. 24 and March 21. The grey columns represent the average values from 1999 to 2010, and the white columns are the 2011 measurements. From Adams et al., 2011.

The variability of the Arctic stratosphere is not well understood, and predicting when the next unusually cold winter might happen is difficult. In February it looked like this spring could bring record ozone losses again (Hand, 2016), but a sudden stratospheric warming in early March and a vortex split mid-March put an end to such speculations. In the future, as the stratosphere cools due to climate change, extremely cold winters might become even colder. So while the Arctic ozone hole has been a one-time phenomenon so far, it has the potential to become a more regular occurrence. Since plenty of people live in the northern parts of the US, Canada, Europe and Russia, strong UV radiation (the consequence of low ozone concentrations) could potentially be harmful if the polar vortex strayed over populated areas. Researchers are working tirelessly to evaluate these risks and predict when and if such events will occur.

2 Responses to Is there an Arctic ozone hole?